Rafting on the Clackamas River

The Clackamas River is well known as one of the classic whitewater rafting runs of the Pacific Northwest with plenty of great class III-IV intermediate whitewater.

When paddlers refer to the Upper Clackamas they mean the waters upstream of North Fork Resevoir which is part of PGE's hydropower facilties on the river. The run from Sandstone Bridge (Three Lynx) down to the Memaloose Weigh Station just above the reservoir makes a great 13.5 mile day trip although many kayakers focus on the 4.2 mile middle section from Fish Creek to Bob's Hole which serves up the best whitewater and some fine playboating. This section is also the site of the annual Upper Clackamas Whitewater Festival (downriver, slalom, and head-to-head) that takes place in May every year at Carter Bridge.

The character of the run is mostly pool-drop class III rapids which can develop class IV hydraulics as the river rises during intense winter storms. Good consistent flows are available throughout the winter with rain and into spring as snowmelt. The river drops low in the summer but can still be enjoyed as a technical boating experience and a wonderful escape into the National Forest just an hour from downtown Portland. With Highway 224 running along the entire length of this run road scouting is easy and the road itself provides only a minimal intrusion to what is an incredible scenic journey along a forested river. Several Forest Service campgrounds, particularly in the area of Carter Bridge, make this a great weekend destination and you can build your own adventure by exploring upstream sections of the Clackamas or any of the many tributaries.

As you pass beneath the Three Lynx Bridge the river continues on with more fun class II and III and you soon reach the Narrows where the river is squeezed within a mini basalt gorge. Downstream of the gorge is Hole in the Wall Access, a good alternate put-in for a shorter run particularly at the lower range of flows. The next significant rapid is Hole-in-the-Wall where the river slams up against the bedrock wall on river left. There have been accidents here as boaters became trapped in the recirculating current up against the wall so be sure to stay right. The road is above this rapid on river right and it's worth taking a look on the way to the put-in if you have any questions regarding the preferred line.

You will soon come to pass under another bridge and see the Fish Creek boat slide on river left. This is another alternate access point. After a couple class II rapids you will come to one of the bigger drops on the run which is Carter Bridge Rapid. This rapid is upstream of the Carter Bridge and it also the site of annual races held as part of the Upper Clackamas Whitewater Festival.

After Carter Bridge the river passes through a couple more class II rapids including Slingshot before the river pools up at Big Eddy. Just below Big Eddy is Rock 'n Roll and then comes Toilet Bowl which is the last of the significant drops on the run and one of the few not easily visible from the road.

As you see the road along river right, you're be at Bob's Hole. Line up on river left for you chance to surf this feature. Bob's Hole is at one of those sites along the river that is subject to change with floods and each year you can expect it to be a little different. It changed significantly in the 1996 floods and will likely change again. Many kayakers enjoy the playboating at Bob's Hole and it has been a park and play spot but most continue on downstream to Moore Creek Access which is a good take-out option. You can also put-in here or continue through the easier class II float of a couple miles down to the Memaloose Weigh Station. As the river passes the weigh station it settles in behind the slackwaters of the reservoir where Promatory Park offers a final take-out option.

Running through land Managed primarily by the Mount Hood National Forest, the Collawash River flows through deep basalt canyons on its way to the Upper Clackamas. Alternating between extreme whitewater and deep green pools this part of the river lies in a remote area of the Bull of the Woods Wilderness.

At least a dozen lakes can be found among the peaks and ridges of the surrounding area and a 68 mile trail system winds its way through the old growth Douglas Fir, western hemlock and past deserted mine shafts. If you're very lucky you might even spot a Northern Spotted Owl.

In the context of the entire Clackamas River , this portion of the basin is critical for the production of wild fish. Coho, spring Chinook, steelhead and resident cutthroat and rainbow trout spawn and rear in the watersheds of the Collawash and surrounding rivers. Because of the upper basin's importance for wild fish, it is important to restore degraded areas and protect high quality habitats.

Forty-seven miles (76 km) of the Clackamas River, from Big Springs to Big Cliff, are federally protected as part of the NWSRS. Of these, 20 miles (32 km) are designated as "scenic" and 27 miles (43 km) as "recreational". The protected portion of the Clackamas features five categories of resources that are considered to be "outstandingly remarkable", defined by the NWSRS as having "importance to the region or nation".

The five are opportunities for recreation such as white water rafting near the Portland metropolitan area; anadromous fish habitat supporting wild late winter coho, spring chinook, and winter steelhead; habitat for the federally threatened bald eagle and northern spotted owl; potential habitat for the threatened peregrine falcon; the forests of old-growth Douglas-fir along its banks; and historic importance.   All 13.5 miles (21.7 km) of a tributary, the Roaring River, are designated as Wild and Scenic and are within the Roaring River Wilderness.   Another 4.2 miles (6.8 km) of the South Fork Clackamas River were designated as Wild and Scenic along with the creation of the Clackamas Wilderness in 2009. 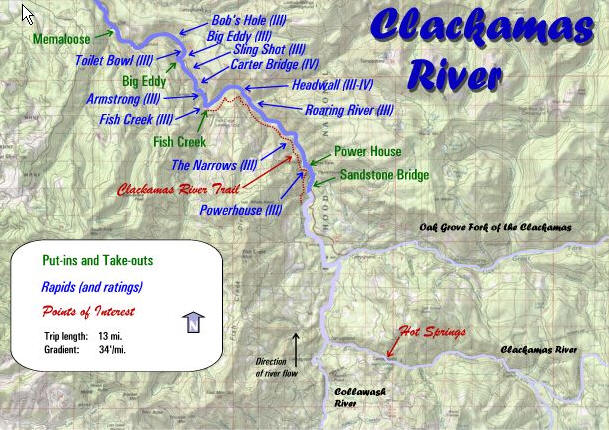